Getting ready for a show: Cogs & Gears 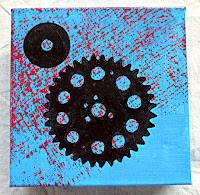 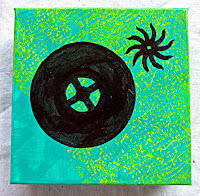 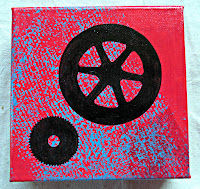 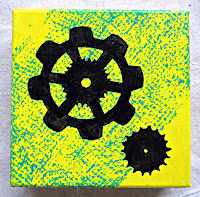 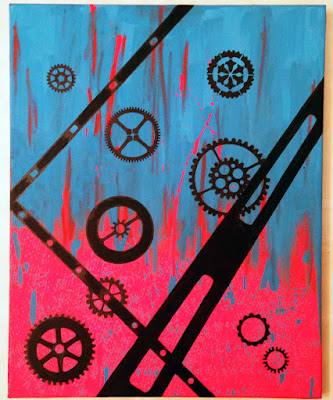 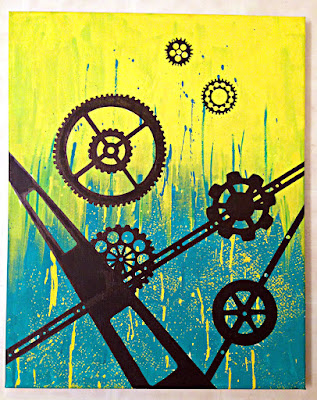 Gallery-wrapped, 20" H x 16" W x 1.5" D
Nicole Arnold
Artist Statement on Cogs & Gears series of paintings:
Snapshots of interconnectedness
Over the past three years, I have studied the works of the modern masters of the early 20th century including Kandinsky, Mondrian, Rothko, and Frank Lloyd Wright.  Out of all the artists I studied, Kandinsky’s life and work have especially spoken to me.
Kandinsky wrote extensively on color, shape and the meaning behind these elemental choices in painting.  As with so many individuals, the two world wars decimated his life.  WWI forced him home to Russia, where his son would die from complications from starvation.  The horrors of war would not end there.  Kandinsky moved to Germany to teach at the Bauhaus school.  Because the Bauhaus school refused to produce art glorifying the Fatherland, the Nazis deemed the work subversive.  The Gestapo shut down the Bauhaus, and Kandinsky and his wife moved again outside Paris.  They continued to flee the Nazi invasion of France.  Sadly, Kandinsky died in 1944 before the end of the war.
Despite living in a world that was coming apart, Kandinsky inspired students and produced uplifting abstract work that still piques discussion on important artistic principles.  His students remembered and revered him as genteel, distinguished and mannerly.  They spoke of him as otherworldly in a positive sense:  he embodied a kinder era of respect and noblesse oblige.  (Kandinsky descended from aristocracy, ruined during economic upheavals in Russia.)
Kandinsky’s work inspired me to create, using the basics of shapes and bright colors. Here is what I see when I view my series.
In these acrylic paintings, I focus most on modified circles and change them into silhouetted cogwheels.  Through the industrial motifs of India ink and mechanical shapes, I communicate the interconnectedness of life.  Each of us works on larger projects with other workers.  Each project can be broken down to basic elements or ideas that seemingly float along in an invisible atmosphere and then eventually come together as a final product.  My shapes are not necessarily interlocked because the painting is a snapshot -- a moment in time -- when we are working.  It’s a detail, not the final completed project.
The bright colors represent the hopes, dreams and enthusiasm each of us has for our respective projects.  The cogs and gears themselves represent people working.  The straight edges represent rules that must be followed in order for structure to hold a project together.
Others may see something different in the Cogs & Gears paintings.  They may see an industrial world.  They may see a technological project.  I welcome individual interpretations, but I hope that the bright color palette will remain with the viewer.  Kandinsky’s color choices still speak across the ages -- instilling hope in an uncertain world.
- Nicole Arnold, July 2015